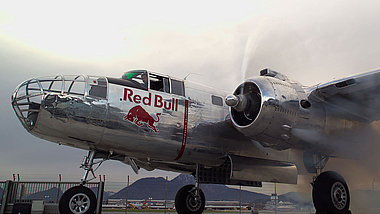 The B-25 is one of the most dazzling aircraft ever built in the USA. There are many stories about the famous twin-engined “Mitchell”, which was named in honor of General William Mitchell.

For instance, there’s one story about a Mitchell worth $200,000 that exchanged hands for just 10 dollars – without the new owner ever actually receiving the aircraft. On January 31, 1965, a B-25 narrowly missed the Homestead Grays Bridge in Pittsburgh, Pennsylvania after engine failure due to fuel starvation and had to make an emergency landing on the icy waters of the Monongahela River.

During a dramatic rescue mission, four crew members were saved before the aircraft drifted two kilometers downstream and sank 17 minutes later. Despite a large-scale search operation, the “Mitchell” wasn’t found. Nine months later on November 9, the search was called off and the Air Force auctioned off the rights to the aircraft, which today would probably be worth more than a million dollars. The only potential buyer, Pittsburgh Seaplane pilot John Evans, won the bid for a mere ten dollars. No expense or effort was spared as he tried to find the missing wreck. Divers combed through every inch of the Monongahela, finding plenty of debris, but no 15-ton aircraft – it was “as if it never existed”.

One possible explanation was that there was an underground river running below the city and the “Mon” river. Many Pittsburghers still believe that the missing aircraft was swallowed by this mysterious river, where it found its final resting place.

And then there’s the story about April 18, 1942 – the day that was to go down in history for one of the most spectacular aircraft carrier maneuvers ever: the “Doolittle Raid”. The raid was named after US-American Lieutenant James H. Doolittle, who was an excellent aircraft technician. Sixteen B-25 Mitchells were planned to be launched from the USS Hornet aircraft carrier and fly towards Japan.

However, with a take-off weight of 15 tons, the bombers were not made to be launched from an aircraft carrier. To reduce weight, Doolittle had the “Mitchells” stripped down, removing any unnecessary parts and bigger tanks. For instance, the aircraft’s guns were replaced by painted, black broomsticks to deceive the enemy. In the end, these B-25s were the first bombers to be launched from an aircraft deck – with a runway length of only 250 meters!

Between 1941 and 1945, North American Aviation produced about 10,000 B-25 aircraft, characterized by their distinctive twin tail. The aircraft’s trademark features are its glass nose and tail guns. Some versions – like the one used in the Doolittle Raid in the Pacific – came equipped with a turret on the upper and lower side of the fuselage instead of a rear gunner station.

The most frequently built version of the aircraft is the B-25J, which is also owned by the Flying Bulls. Compared to older aircraft types, it comes with many improvements such as de-icing equipment. The glass tail of the demilitarized version is one of the Flying Bulls fleet’s most popular photo locations and vantage points. The two 14-cylinder twin radial engines produced by the Curtiss-Wright Corporation power the aircraft’s propellers with 3400HP, allowing for top speeds of more than 500km/h.