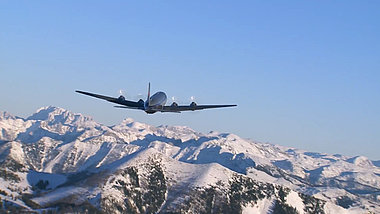 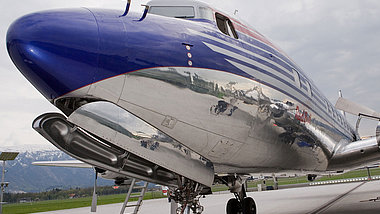 Without a doubt, the DC-6B is the crown jewel of the Flying Bulls. Built in 1958, the plane has had an illustrious past. She was used to chauffeur heads of state and their celebrity guests all over the world. The sheer size and the unmistakable 1950s coat of the DC-6B are as impressive as ever.

All over the world, the DC-6B is renowned for her eventful history. Manufactured in Douglas, Santa Monica, in 1958, the plane was sold to the stateowned Yugoslavian airline JAT. Premier Marshall Josip Broz Tito ordered a luxury model for himself and his celebrity guests. In 1975, Tito sold the plane to Zambia’s head of state Kenneth Kaunda who also used the DC-6B as a luxury airliner – until he left her abandoned outside Lusaka airport.

This is where Chris Schutte, the manager of a small aviation company in Windhoek, Namibia, found her, and by chance discovered a sister plane! In fact, Schutte bought the last two remaining DC-6Bs and began restoring them. However, as troubles along the Angolan border intensified, Schutte was forced to sell one of the DC-6B planes, and that’s exactly when the Flying Bulls appeared on the scene.

In March 2000, Sigi Angerer, chief Flying Bulls pilot, spotted the DC-6B for sale in Africa in an airline magazine and quickly made his move. On July 7th 2000, the plane took off from Windhoek and headed for Salzburg. The flight took 28 hours, with 4 stops, causing no problems. In 2001, restoration began and following thousands of hours of labour, the DC-6B left the workshop in all her glory three years later.

Once registered as “Fish Eagle” under the registration number V5-NCF in Namibia, the plane received the American aircraft register N996DM shortly after its transfer to Austria. Thirteen years later, the DC-6B was finally given Austrian citizenship and now operates under the Austrian registration OE-LDM, making it the first DC-6B to ever receive an Austrian code.

The first DC-6B to receive an Austrian code has fascinated people ever since its arrival, boasting a brand-new interior, four new engines and the latest technology. Everyone agrees the DC-6B is in better shape today than when she left her Douglas birthplace in 1958.