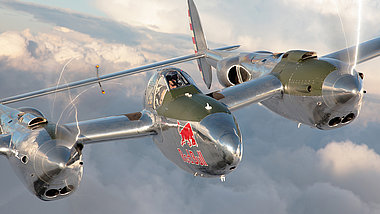 The P-38 Lightning by Lockheed might be one of the most impressive aircraft in the world of aviation. With its unconventional twin tail, it was commonly used during the Pacific War. The twin Allison engines with 1,600 horsepower make the P-38 the perfect warbird for long distances due to its ability to fly higher and faster than other fighters built around the same time. Between 1941 and 1945 more than 10,000 aircraft were produced. Today, the P-38 is a very rare model and appears to be priceless. It comes as no surprise that no efforts and costs were spared to save and restore those treasures.

On July 31st, 1944 the famous author and pilot Antoine de Saint-Exupéry (“The little Prince”) set off in Corsica for an expedition to the South of France in his Lockheed P-38, from which he never returned. The story surrounding the disappearance of the famous author is still being explored today. However, the discovery of pieces of the aircraft suggests that the plane was shot down on that day.

An incident in 1942 paved the way for the discovery of one of the few remaining Lightnings. In July 1942, a P-38 fleet set off from the United States to England. However, due to bad weather conditions, six of the pilots had to turn around before they reached Iceland and make a forced landing on the icy island of Greenland. Five of the airplanes are now covered in a 100m thick layer of ice. In 1992, one of the aircraft was rescued. Today, it is known as the “Glacier Girl” and operates in the United States.

The only P-38 in Europe, and one of the only ones that is still being used, is owned by the Flying Bulls and can be found in Hangar 7 in Salzburg. It is one of the most treasured exhibition pieces and brightens the entire Hangar with its perfectly polished skin. More than four years had to pass until the perfectly restored P-38 was finally shipped from the United States to Hamburg in one piece. On May 10th, it moved into the Hangar 7 where it can still be admired today.

Today it can be said that the Flying Bulls’ P-38, registered N25Y (an American registration), is one of the most beautiful and well-maintained Lightnings worldwide – a graceful aircraft both on the ground and in the air. Its twin Allision V-12 reciprocating engines with turbochargers allow the almost 8 ton aircraft to reach 760 km/h and a height only modern jets can normally reach. The P-38 is unique in all aspects and considered a unique beauty by many admirers.