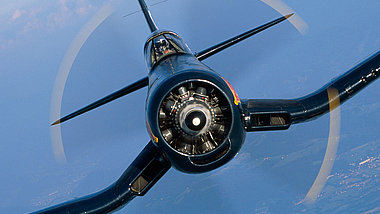 Similar to car brands, all big clock manufacturers produce one masterpiece – a flagship product that is associated with the company. Most of the time these rarities are much sought-after collectors’ items and are very expensive. To achieve this perfectionism, precision in the development and processing of these products is crucial. It is impossible to skimp on production or material. If aircrafts, respectively warbirds are regarded, there's no way to pass the Corsair. Currently, only four models made by Chance Vought Aircraft Inc. are soaring through the sky in Europe. In total, there are around fifteen Corsairs in the world.

The Chance Vought F4U Corsair was developed to reach maximum speed with minimal air resistance. Every stud is flush-mounted, the transitions are aerodynamically perfect, and every footstep and handle blends into the aluminum skin of the body. Both the main undercarriage and the tail wheel can be retracted into the shaft and disappear under precise closing lids that were manufactured at a time when computers did not even exist in science fiction films.

The prototype of the Corsair was developed in 1938. The model aimed to deliver around 2000 HP from an 18 cylinder double radial engine by Pratt & Whitney. The 46,000 cubic centimeters of the propulsion make it not only extremely powerful, but also really loud. The gull-wing configuration, which made it possible to install a relatively short and light carriage, was a result of the propeller’s large four-meter diameter. Precise surface geometry resulted in three beautifully engineered and divided hydraulic landing flaps known as Fowler flaps.

Whilst even the first models could reach 670 km/h, the top speed had climbed to 700 km/h by 1952. The Corsair’s incredible performance was due to the improved propeller and water injection of the F4U-4 model. The latter was responsible for the inner cooling of the engine. As a result, the cooler combustion air and higher density increased the efficiency of the Corsair.

A unique feature is the hydraulic system, which allows the wings to be folded in vertically with a pressure ranging between 900 and 1200 psi (62 and 82 bar) when the plane is parked. This system was introduced due to the limited space on aircraft carriers, for which the Corsair was designed.

Landing and taking off on aircraft carriers was extremely difficult with the F4U as its high torque and the large diameter of the propeller tended to spin out easily during takeoff. The pilot had to carefully determine the Corsair’s takeoff velocity. If the velocity was too high, there was a chance that the Corsair would spin around the propeller; if it was too low, the aircraft would be too slow for takeoff.

The US Marine Corps and the US Navy mainly used the Chance Vought F4U during the Pacific War. Additional compartments were used to carry and drop bombs on enemy targets. After dropping the bombs, pilots still had a heavy fighter, but with excellent performance and a top speed that was hard to beat at that time. This is how the Corsair was able to take on maneuverable Japanese Mitsubishi fighters. During the Korean War at the beginning of the 50s, this model was still used and one Corsair pilot even beat a Soviet jet.

Today, the single-seated masterpiece is fully aerobatic and presented at various air displays throughout Europe by the Flying Bulls!