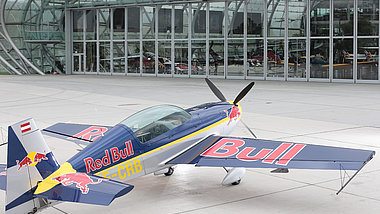 Anyone who has ever watched an Extra perform an aerobatic display will not think twice about its name. Because Extra is what these machines accomplish in the sky.

Nevertheless, the name actually goes back to its inventor, Walter Extra. In 1993, the first propeller-driven aircraft left the factory of his company Extra Aircraft at Schwarze Heide airfield near Dinslaken in Germany. The flying machines of the multiple German champion in motorized aerobatics are characterized by their extreme maneuverability. This is due to their powerful engines, light weight, short wingspan and large control surfaces with their large deflection angles.

The two-seater sisters, the Flying Bulls' Extra 330LX are used as media machines for aerobatic briefings and for individual performances at aviation events, but have also made appearances at airshows in Germany and Austria and initially flew worldwide for the former Red Bull Air Race. The aircraft are based on the two-seat Extra 300L. Only real experts will figure out the differences between the 300 models, because the details are in the shape and size of the wings, tail unit and equipment.

The 330LX's power comes from its six-cylinder Lycoming AEIO-580 engine and Muehlbauer, MTV 9, 3-blade constant speed propeller. This 315-hp combo accelerates the aircraft to a top speed of nearly 410 km/h. The climb rate is up to 975 meters per minute, the maximum flight altitude is about 4,880 meters and this with a maximum range of up to 1,100 km, which is however rather a minor matter for aerobatic pilots.
As a further extra, it should be mentioned that both aircraft are certified for glider twin towing.

The expressions on the faces of numerous journalists and celebrities like Smudo, Sebastian Vettel, Oliver Polzer, Christian Schiester or Daniel Schuhmacher when they return from a flight with the Extra, tell a story of their own.
Up to 8G and many race-like flight maneuvers let the guests experience the forces and at the same time the fascination of aerobatics up close. The passenger takes a seat in the front seat of the aircraft and looks at minimal instrumentation, which gives information about speed, altitude and G-load. The rear cockpit is reserved for the pilot and features all instruments for monitoring and control.
The Flying Bulls' Extras 330LX got its first taste of sky in 2013. The cockpit is reserved for only a handful of pilots. Anyone who is allowed to take a seat in the passenger seat should have gotten in good with the pilot beforehand ...