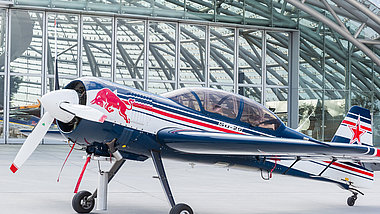 The Su-29 was built as a training aircraft for the Russian military by Sukhoi, an aircraft manufacturer established in 1939. Consequently, neither costs nor efforts were spared during its development and construction. Although the pilot is supported by automatic air-fuel mixture adjustment, the aerobatics aircraft is tricky to handle. For instance, starting the engines of the Su-29 is a complex procedure. At first the starter, which is powered by air pressure, introduces compressed air into the synchronized cylinders.

At the same time, the necessary spark is provided to ignite the radial engine, which is known for its impressive sound. The 360HP Vedenejev M-14 P, a 9-cylinder supercharged radial engine, powers the 2.6m diameter propeller. The bladed shutters in front of the engine work similar to a camera shutter and help to regulate cylinder temperature. This means that the pilot also has to ensure the right operating temperature.

If you take a closer look at the Su-29’s construction, all its parts were built to live up to military standards. For instance, all lines within the aircraft are color-coded: blue for air, yellow for fuel, brown for oil. What’s more, all levers and control elements are extremely solid. The cockpit hood’s emergency jettison mechanism is so elaborate that it can be detached from the anchoring in a controlled manner. Any operating errors on the ground would take technicians at least eight hours of work to get the system up and running again.

The Su-29’s airframe consists of two milled and welded titanium profiles. The surfaces as well as horizontal and vertical tails and rear fuselage are made from carbon fiber. The two-seater’s cabin area is a trellis construction. Taking a closer look at the huge ailerons, it’s not surprising that they each require the support of two spades to reduce aileron forces. It is also not much of a surprise that the aircraft has an extremely big and solid control stick. After all, during aerobatic maneuvers the Su-29 can only be flown with both hands on the control stick. High rudder forces are reduced by a continuous control cable and remarkably long pedal travel. With its many components and extremely complex handling, the Russian buffalo is somewhat “over-engineered” and not at all easy to fly.

Compared to a western aerobatics aircraft like the Edge 540 or Extra 300, the Su-29 requires about four times as many maintenance hours. Also, pilots need a lot more flight training hours than for smaller, lighter aerobatics aircraft built in the USA or Germany. On the one hand, this is due to the extreme torque and gyro effect of the huge propeller. On the other hand, it is caused by the massive cowling and resulting high air drag as well as by the aircraft’s 1.2-ton takeoff weight, which makes the Su-29 about half as much heavier than the Edge.

The Flying Bulls’ Sukhoi Su-29 was built in 2002. As this particular model was built for the American market, it comes with high-quality default components such as Cleveland brakes, western aviation electronics and a special fuel computer. What’s more, every individual production step is documented, giving the Su-29 a complete history as well as individually inspected and approved documents for every component. When the Flying Bulls purchased the Su-29, it was a second-hand aircraft with only 130 flight hours under its belt. So to speak, the Su-29 was as good as new.

The Sukhoi is a unique aerobatic aircraft. Difficult to fly and critical at operating limits, it has unique aerobatic talents that require a highly skilled pilot. What’s more, the aircraft is known for its über perfect technology and the unique sound of the radial engine. Compared to other aerobatic aircraft like the Edge or Extra, the huge bulk of the latest Austrian bull looks like a flying dinosaur among eagles.