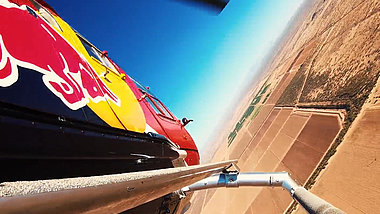 1. Do you remember your first flight as a pilot?

MF: My godfather’s confirmation present for me was a helicopter sightseeing flight. From that moment on things were settled ….. Some years later I was finally allowed to take the controls on a trial flight of an Enstrom 280 in Switzerland. I will remember every single moment of this flight for the rest of my life.

2. How many flying hours have you completed so far?

3. Which aircraft/helicopter would you like to fly if you were free to choose?

MF: The Harrier, … it is virtually a helicopter. Or the Eurocopter X3, unfortunately it’s only a prototype but probably the helicopter technology of the future.

4. What flight qualities of what type of helicopter wow you the most?

MF: The aerobatic qualities of the BO 105 are awesome! Fascinating what this helicopter is capable of, especially if you know how difficult it is to control a helicopter. It's very special to be given the opportunity to do something so unique.

5. Is there any single technical or design feature of your helicopter that fascinates you most?

MF: Yes, the plexiglass cockpit of the Bell 47. It offers the most striking view you could wish for on a flight. There is no other helicopter that offers such a panorama.

6. Given the age of the machines – have you never been uneasy when you climbed on board or during the flight?

MF: No; after all the Flying Bulls have the best maintained helicopters you can get!

7. What was the most turbulent flight of your life?

MF: I have experienced the odd turbulence, but nothing major. You also need to have a little bit of luck in the flying business!

8. What helicopter should be added without fail to the Flying Bulls’ collection?

MF: A Sikorsky S61 so we can also land on water. The Cessna Caravan would certainly enjoy the company.