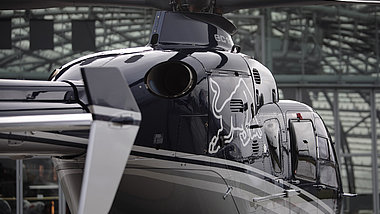 The Cineflex camera is mounted to a boom right below the nose of the helicopter. At low altitude it sweeps across a film set, where a car chase is taking place a mere ten meters below. Built in Germany, the EC135 is versatile and used for filming movies or TV shows, flying rescue or police missions or even getting someone like former soccer star Franz Beckenbauer from one stadium to the other during the 2006 World Cup.

The Eurocopter EC135 is a state-of-the-art multi-purpose aircraft. With rotor blades made from carbon fiber reinforced plastic, the helicopter’s structure and weight have been optimized for flying. What’s more, its precise shape makes it particularly aerodynamic.

Eurocopter offers two different engines for the helicopter, each one with almost 650 HP. One of them is a turboshaft engine crafted by Canadian manufacturers Pratt & Whitney. The other is an engine by French manufacturers Turbomeca Arrius, who got their name from the Pyrenean “Pic d’Arrius” mountain. With either of the two engines, the EC135 reaches top speeds of 300km/h and altitudes of more than 6,000m.

The hingeless and bearingless main rotor keeps the usual vibrations down to a minimum and reduced mechanical forces improve the helicopters maneuverability and noise level.

For the tail rotor, Eurocopter used a shrouded Fenestron. At first, this type of construction was not very popular with technicians because of the high development efforts it required, but today it is an essential part of their formula for success.

The shrouded tail rotor has a number of benefits. Unlike conventional two- or four-blade tail rotors, the Eurocopter version features ten (moving) rotor blades and ten (fixed) stator blades. These may have variable angular spacing so that the noise is significantly reduced.

Another benefit of the EC135’s special tail rotor is the reduced risk of accidents. The helicopter is particularly useful for difficult and challenging rescue missions as the shrouded tail rotor is not as easily damaged on contact with surrounding vegetation and thus also offers increased protection for people on the ground.

Of course, the EC135’s aviation electronics are state-of-the-art as well. For instance, the engine is monitored by a FADEC system (full authority digital engine control), which automatically controls all relevant engine procedures and is particularly convenient when starting the turbine. What’s more, all flight, engine, navigation and radio information is displayed on modern multi-purpose screens.

Taking a look at the history of the EC135, the helicopter is modeled on the BO 105 by renowned manufacturers Messerschmitt-Bölkow-Blohm (MBB). When Eurocopter was founded in 1992, MBB brought the BO108 prototype, an evolved version of the BO 105, into the company. Although the BO108 never went into serial production, it served as the basis for the EC135, which took off for its maiden flight over Ottobrunn near Munich, Germany in February 1994.

Since the start of serial production in 1996, more than 1,000 models of the popular multi-purpose helicopter have been shipped to 58 countries, making it the biggest success of the relatively young, wholly-owned subsidiary of the EADS (European Defence and Space Company).

Today, the EC135 is widely used by countries all over the world, such as in Germany with the German ADAC Air Rescue, the German Border Police and the German Armed Forces. In addition, the helicopter is used by Austria’s ÖAMTC Air Rescue, France’s SAMU Air Rescue and by many companies in the USA.

The EC135 is a cutting-edge aircraft that is constantly being improved and used for new purposes in new fields. For instance, the German Aerospace Center (DLR) currently uses the EC135 as a research helicopter using fly-by-light technology. Instead of electrical signals, control inputs are given via light traveling through glass fiber cables. One of the benefits of this technology is increased safety from electromagnetic interferences. What’s more, the technology allows for simulations of control systems for helicopters of all sizes. Basically, the research helicopter is one big flying simulator and living proof of the fact that Eurocopter’s helicopters continue to hover above the cutting edge!