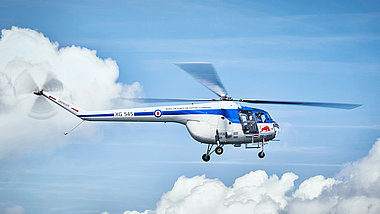 The search for another superlative, one that hasn’t already been used, gets a little bit harder with every new aircraft that the Flying Bulls add to their list. Just for once, this was not the case with the most recent member of the Flying Bulls. The concept was clear from the start: unique. Not in the way claimed by any old yoghurt drink either but in the way it was originally intended: matchless. The Sycamore in hangar 8 is the only existing example of its type in the world that is still capable of flying!

The Sycamore takes its name from the English tree known as the sycamore maple. Why? Anyone who has seen the slow revolving motion of a sycamore seed as it falls from the tree will understand precisely why. Added to this, the rotor blades are made of Australian maple wood and initially this was a source of major concern for Blacky Schwarz, chief helicopter pilot with the Flying Bulls. But let’s start at the beginning.

At the end of the Second World War, the Bristol Aeroplane Company in England began to develop an innovative type of helicopter. Under the leadership of Raoul Hafner, who emigrated from Austria to England prior to the Second World War, the company created the first ever helicopter to be built in Britain and its Mk 1 prototype took off on its maiden flight in 1947. The second version, the Mk 2, followed in 1949. By then it had 5 seats and was equipped with a 550 HP English Alvis-Leonides, 9-cylinder radial engine. The motor, which was installed in the horizontal position behind the back seat, would undoubtedly present a very strange sight nowadays. In its time, however, it was completely the norm because back then it was not possible to provide in-line engines with adequate cooling. The Sycamore was fitted with a triple-blade main rotor and a triple-blade rear rotor which together were responsible for an aircraft with lower-vibration and improved efficiency but they were also considerably more complex than twin-blade rotors from a design point of view. The rotor blades which are made entirely of wood are delicate, handcrafted works of art. The main rotor was designed so that the blades could be folded to one side, i.e. towards the rear boom. This meant that it was possible to save valuable space on naval vessels and in the hangar.

Hafner’s design became a huge commercial success. With its high-strength tail cell made of hydronalium (a seawater-resistant aluminium alloy), a top speed of almost 200 km/h and a range of around 430 km, the Bristol 171 was way ahead of its time. Sea and air armed forces of many countries were equipped with the helicopter, orders were received later for air-sea rescue and passenger transport craft.

The Flying Bulls’ specimen built in 1957 served as a military helicopter in the German armed forces and was withdrawn from service in 1969. By various roundabout routes, the machine ended up in Switzerland in the hands of collector and helicopter enthusiast Peter Schmidt. It was also Peter, a vineyard owner, who worked flat out and even managed to obtain special permission from no less a person than the Queen of England herself for the Sycamore to be allowed to bear its original colours of the Royal Air Force (RAF) and its British national emblems. Permission was granted under the strict condition that this Sycamore would only ever be a source of pride and honour to the RAF. No wonder then that the machine is virtually a national relic among tradition-conscious Englishmen who are into flying.

Its former owner’s most fervent wish was that his Sycamore should retain its airworthiness. There were not many connoisseurs in the world that were qualified to make sure that remained the case. The helicopter was handed over to the Flying Bulls with confidence along with a massive stock of spare parts which the previous owner had painstakingly collected over the years.

Blacky Schwarz was overjoyed to be taking over this one-off craft but this was also mixed with a certain amount of respect. Are the wooden rotor blades still safe and reliable? An expensive test at the Technical University of Graz was carried out to shed light on this. The result surprised everyone: the rating was “like new”! All that remained was to learn the flight characteristics. The only problem is that there are no longer any pilots capable of flying who have a valid licence for the Sycamore. As a result, Europe’s most experienced helicopter pilot faces a task he could never have dreamed of: prior to the major overhaul, Blacky Schwarz will have to teach himself the Sycamore’s flight characteristics. It’s said they are a law unto themselves. The helicopter with a rotor disc diameter of 14.8 m is certainly not considered an easy craft to fly. But who better to accomplish this feat if not the newly-crowned world champion in freestyle helicopter flying?