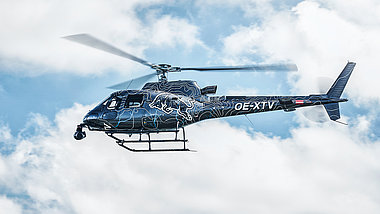 The idea behind the procurement of the Airbus Helicopters 350 B3+ Écureuil, which is assembled in Marignane near Marseille, was to secure a helicopter suitable for tough daily operations. The Flying Bulls wouldn’t, however, be who they are had they not given their new colleague something extraordinary. The result: the “squirrel” (English translation of “écureuil”) certainly sports the most beautiful working gear of its kind.

The fine lines on the skin of the light utility helicopter with one propulsion unit resemble the topography surrounding the Austrian “Steinernes Meer” mountain range. As aesthetically pleasing its outward appearance may be, the future tasks of the AS 350 will be incredibly challenging. The main duty of the helicopter is to make camera flights for in-house productions of ServusTV, a TV station owned by Red Bull. Up until now, these camera flights were often conducted with the BO 105 helicopters. “Easing the burden on the latter was an issue close to my heart”, says Blacky Schwarz, the chief helicopter pilot of the Flying Bulls. “We own the two only helicopters with a civil license for aerobatics in Europe, as well as two in the US. That’s why we should utilise them as sparingly as possible!”

The AS 350 was first introduced in 1974 - back then by Aérospatiale, which later became Eurocopter - and was the first helicopter built on an assembly line. The former shareholder PSA, which owns, among others, the vehicle brands Peugeot and Citroen, was pursuing the rather ambitious goal of producing an inexpensive helicopter. Initially, numerous automotive components from the large-scale production lines, such as switches for the dashboard or tailgate dampers, found their way into the AS 350. However, this approach soon proved to be rather impractical. Other innovations, such as the Starflex rotor system made of fibreglass laminate, are still installed almost unchanged to this day. This revolutionary rotor head needs merely a quarter of the normally necessary parts and is thus considerably easier to maintain and also more cost-effective. Conversions, as are required for switching to a different camera system for instance, can be carried out in no time, mainly because all fathomable appliances for all types of cameras are already mounted and there is no need for additional certifications. The “squirrel” proves to be just as practical in terms of everyday conversions. When used for transporting parachutists, the entire back bench can be removed in just a few simple steps. By the way, said back bench was - just like the front seat - adorned with an exceptionally beautiful cover in Flying Bulls’ in-house upholstery division.

As is usually the case with the Flying Bulls, the pleasure of flying does not fall by the wayside either. Modern systems such as Dual FADEC (Full Authority Digital Engine Control) and FLI (First Limit Indicator) make life considerably easier for the pilot, be it in terms of controlling the propulsion units or the sensitive handling of the machine itself and potential external loads. “This helicopter is what every flight instructor dreams of”, Blacky Schwarz smiles.

Almost 900hp give the lightweight Écureuil power that can almost match that of the Flying Bull’s Bell Cobra TAH-1F. It is no coincidence that the AS 350 holds the unofficial altitude records for helicopters. A B3+ was also the very first helicopter to land on Mount Everest at an altitude of 8,848m. If you should spot the Airbus Helicopters AS 350 B3+ on one of the summits of the “Steinernes Meer” mountain range, which can reach up to 2,655m in altitude, you can rest assured that this helicopter, in all its elegance, has not exhausted its potential by a large margin.