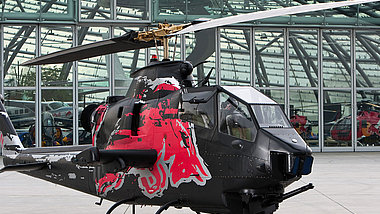 With the delivery of the first Apaches the Army gradually began to part company with the Cobra; the Marines and some other countries still use this model. The Flying Bulls’ new acquirement is a Bell 209/AH-1F, which was built originally in 1967. It was “Modernized” in 1976 by conversion to the “S” Model, called the “AH-1 S". This Cobra was transferred by the U.S. Military to a Mechanic School for use as a training aid. It was discovered in derelict condition by well known American Helicopter Collector, Brian Reynolds in 2010. Starting in 2019, this Cobra was fully restored and customized for The Flying Bulls.

The Flying Bulls discovered this gem and after protracted export formalities – the Pentagon keeps a watchful eye on former military equipment – they were finally able to bring it to Salzburg, where it was received with all honours in March 2021.

The Flying Bulls’ Bell AH-1F/209 Cobra is made up completely of original parts straight from the factory – and the Bulls’ specimen is the only one of two Cobra’s in Europe.
The Flying Bulls pilots, who had to go through special training in the USA for this helicopter and will be exhibiting it mainly at air shows.
When the Bell Cobra is not flying, it can of course be seen at any time in Hangar-7 at Salzburg Airport.