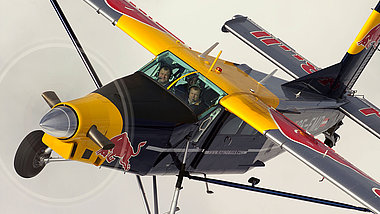 Oil fields, jungle, deep sea - the Pilatus Porter PC-6 starred as a single-engine multi-purpose airplane in Ecuador before joining the Flying Bulls. This Pilatus Porter PC-6 was built in 1998 by the Swiss Pilatus Works, initially purely as a presentation aircraft. A year later, the plane was sold to Ecuador and served primarily in the oil business.

It also showed its credentials as a rescue, passenger and cargo aircraft in the jungle. By 2004, however, the Porter had been bought back by Pilatus Werke and sold on to the Flying Bulls shortly after. Equipped with a propeller turbine, the PC-6 is a shoulder wing aeroplane featuring a fixed alighting gear and tail wheel. It is renowned for its excellent “short take off and landing” (“STOL”) qualities, even on the most difficult surfaces. It’s also very well suited to parachuting, hence the Flying Bulls’ plan to allow the Military Sports Association (HSV) to use the Porter.

However, a lot of work needed to be done before the plane was completed in April 2005. First of all, the Porter received a full service and brand new interior. New avionics were fitted in line with IFR (Instrument Flight Rules) standards, the outer shell was repainted and the Austrian certificate granted. Also a 4 - blade propeller replaced the old 3-blade, in compliance with environmental standards. When it was all finished, a dream came true for the HSV.

At last they had their very own airdrop plane – impressively painted to illustrate the parachutists’ aerial choreography. In the end, due to the constant increase in parachute outings, the Flying Bulls decided to take the parachute team under their wings. Today, four professionals perform as the “Red Bull Skydive Team”.

We would like to inform all model plane enthusiasts and friends of the Flying Bulls fleet that the company Flitework is now licensed to manufacture and sell our PC-6 RC Model.
More info at: www.flitework.at