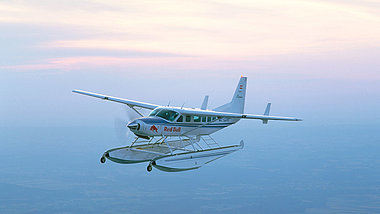 In 1911 Clyde Vernon Cessna built his first plane out of spruce wood with a cotton lining. The result was an open shoulder-wing airplane with a 4 cylinder two-strike engine with 40 HP. However, in the beginning the Cessna and its “silver wing” kept on crashing and had to be repaired repeatedly until it was finally able to fly. Clyde kept on trying for several months until he finally managed to land in the place where he took off. Thanks to his incredible persistence Clyde Cessna has gone down as one of the great aviation pioneers.

The formation of the Cessna Aircraft Company in 1927 laid the foundation for a company that soon became the paragon of single-engine airplanes worldwide. Few people know that Clyde and his son Eldon also built the Air Racer CR-2 in the 1930s in which Clyde’s best friend Roy Liggett crashed during the Chicago Air Race. The accident changed Clyde Cessna’s attitude towards aviation. In addition, the Cessna Aircraft Company suffered deeply under the consequences of the Great Depression and was eventually shut down. In 1936 Clyde Cessna sold the company to his nephews Dwane and Dwight Wallace and retired from the aviation industry.

In the meantime Dwane Wallace and Eldon Cessna had developed the “Airmaster Design” which excelled on all levels: Landing airbrakes were added to the wings, which was a unique innovation at the time. The early Cessna was also one of the first airplanes to incorporate flaps. These improvements made the Cessna Airmaster incredibly aerodynamic and one of the most efficient aircraft worldwide.

After the war the Cessna Aircraft Company started building the all-metal “Airmaster Design” airplanes. Later, these models were built with strutted areas that unfortunately increased the drag but also resulted in a significant weight decrease. Various models ranged from the Cessna 120 two-seater airplane with a tail wheel to the Cessna 182 Skylane that is still produced today.

The Cessna 208 Caravan was incredibly successful in the early 1980s when more than 2,000 models of the two million dollar machine were sold. It became the most sold cargo and passenger plane worldwide. In 1986 the more powerful 208B Super Cargomaster was developed, followed by the Grand Caravan in 1990, which was exactly 1.22m longer.

Just like all Cessnas, the 208 is very easy to handle despite its size. The possibility for “Single Pilot Operation”, which means that the airplane can be flown by only one pilot, makes it the ideal plane for business trips and longer journeys. The 208 travels at almost 300km/h and reaches an altitude of up to 7,600m (up to a flight level FL of 250) comparable to the heights reached by jet planes. The Caravan can be found at international airports as well as remote jungle areas. Equipped with floats, it is one of the biggest amphibians worldwide. The Flying Bulls are the proud owners of a Caravan.

The Flying Bull’s amphibious Caravan is mainly used during water shows in Austria, Germany Italy and Switzerland. In 2008 the OE-EDM received a new 75 HP stronger Pratt & Whitney PT6A-114A propeller engine with 675 HP in total. This extra power enables the plane to take off from water after approximately 800 meters. To operate the Caravan with floats, the horizontal tail needs to be equipped with two auxiliary vertical fins as well as “Votex Generators” to optimize the flow at the horizontal tail. Around 15 hours of manpower are needed to maintain the floats as well as the corresponding hydraulic with its two redundant cylinders.

Every year, the glorious Caravan can be admired during the “Scalaria Air Challenge” at Wolfgangsee, one of the most beautiful lakes in Austria. Since its premiere in 2005, the Flying Bulls’ Caravan has become an integral part of the annual event. Even in exclusive company at the “Scalaria Air Challenge”, the Cessna 208 Caravan remains one of the most extraordinary representatives of aviation art.