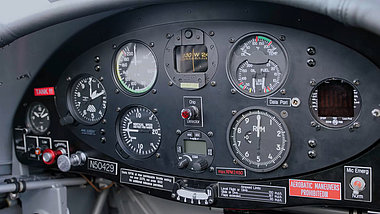 The PT-19 Fairchild was developed as a primary trainer for the US Army Air Corps. The M-62 design by the Fairchild company beat its 17 competitors in a bid for proposals in September 1939. The design was based primarily on wood and fabric. The fuselage was made from a framework of steel tubes with classic wood-construction wings attached. The aircraft was easy to land thanks to its construction as a low wing plane with a widely separated fixed chassis. This made it easier for trainee pilots to learn their new career. The Ranger L-440 was used as an engine - an air-cooled in-line 6 cylinder model ranging 200 horsepower. Some 7,700 of these reliable machines were produced under licence in various countries. Those planes which survived the war are particularly highly regarded by the pilots who continue to fly them today.

The Flying Bulls PT-19 first saw the light of day in 1943 and was sold to the US Army for 6,141 $. Some 10 years later, in 1952, the aircraft was withdrawn from military service and was acquired by two private owners in the USA for sport flights. In 1998, Tom Trute purchased the machine and brought it to England. In October 2007, the Fairchild came under the ownership of the Flying Bulls - as the second "Cabrio" alongside the Stearman, as the PT-19 also does not have any cabin cover. The restoration of the machine then began. And it was not an easy process as spare parts for an aircraft of this age are rare.

Despite this, the crew of mechanics and engineers succeeded in making the plane better than brand new as well as modernising it, without destroying the historical look of the cockpit. The Fairchild now has better brakes, an emergency brake control valve, lighting and of course contemporary on-board electronics.

The 6-440-C5 Ranger engine has also been overhauled to extract greater output from this in-line engine with suspended cylinders. An engine test stand revealed a horsepower of 200. With a weight of 1,270 kg, the Fairchild can now reach a maximum flight speed of 130 mph or ~ 115 knots. The machine has been varnished based on its colouring during the Army days.

The plane showed its new uniform for the first time at Airpower 09 in Steiermark - an exciting moment for aircraft enthusiasts!