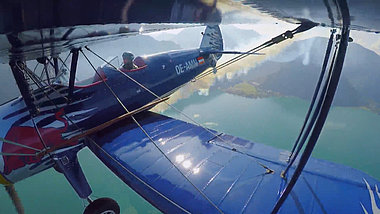 The Boeing PT-17 Stearman takes pilots and spectators straight back to the pioneering age of aviation. With its magnificent biplane construction, the vigorous flame design and the powerful 9-cylinder double-row radial engine, this aircraft is known as the “Harley Davidson of the sky”. No wonder it’s one of the most photographed models at Hangar‑7.

In 1934, the Stearman was developed as a training plane for the US Army. A sturdy airplane with good flight characteristics, the Stearman Model 75 became the standard trainer for the US Army Air Corps and the US Navy. More than 10,000 were built in all. The Flying Bull Stearman was produced in 1943 and featured a 220 HP Lycoming engine. Following her discharge from the American army, like many of her counterparts the Stearman took up her new role as a crop duster.

The Stearman even made it to Hollywood: in Alfred Hitchcock’s “North by North-West”, she chases Cary Grant through cornfields, and she also has a starring role in the “English Patient”. The Flying Bulls model was discovered in a Californian barn, carefully restored and fitted with a 450 HP Pratt & Whitney Junior Wasp engine. It gives the plane climbing qualities found only in a Learjet, according to pilot and Stearman enthusiast Philipp Haidbauer.

But what happens nearer to the ground? Well, the Stearman is infamous for her rather challenging take off and landing. That’s why pilots either love or hate the experience. The challenge is caused by the tail wheel construction with its centre of gravity behind the main landing gear struts. During landing, high side winds of up to 10 knots will test the pilot to his limits. That’s what passion is all about – it’s the tough guys, not everybody’s darling, who stir real emotions.

THE BATTLE OF TROY
Alpha Jet
Fairchild PT-19
To Top