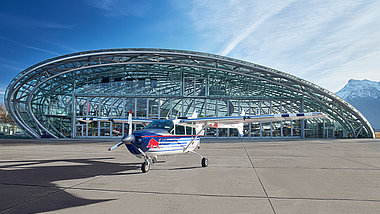 On the runway, even non-aviation buffs recognize the Skymaster with their eyes closed, since its noise rivals even that of the DC-6B. The reason: the characteristics of the Skymaster’s design, which are found in this form in only few flying machines.

The Cessna’s uniqueness is attributable to its center-line thrust, whereby the fuselage is designed as a nacelle. In the front is an engine with a counter-rotating propeller, and in the rear a second engine with a pusher propeller – an arrangement Cessna calls “push-pull.”

The advantage of a push-pull configuration, with two air-cooled 210 HP Continental engines, over a classic design, is that if one of the engines fails there is no torque around the vertical axis. Therefore the aircraft remains as controllable as if both engines were working. In addition to this, the shoulder wing design, allows for good visibility for pilot and observer.

There is also a drawback, namely that the rear engine can encounter cooling problems.
But the noise is a far more serious problem. The turbulent air pushed by the front propeller meets the air from the rear propeller at a higher speed, thus generating almost supersonic speeds of the prop blade tips. The noise issue, and also the lesser efficiency at the rear propeller, were definitely reasons why this design was never very popular.

A number of civilian and military models of this six-seater aircraft (one pilot with five passengers) were manufactured from 1963 to 1982 – 2,993 units in all. The version made for the US Air Force was called the O-2, whereby “O” stands for observer, since the 337 was used for reconnaissance flights in Vietnam and elsewhere.

The glass door on this model is highly useful for today’s safari tour operators.
“The Skymaster is the very model of a bush aircraft,” says Hans Pallaske, the plane’s Flying Bulls pilot. “The aircraft is lightweight and thanks to its power can take off and land on short airstrips.”
The Flying Bulls model was built in 1969, and on being delivered by the plant in Wichita, was sold to Chile. The aircraft, whose current registration is N991DM, spent nearly 15 years in a garage after having been owned by a series of amateur pilots, and in 2007 was restored down to the most minute detail. Three-blade propellers and a STOL kit, which allows for greater lift at slower airspeeds, are only two of the numerous changes that were made.

“The aircraft is in far better shape today than on its delivery in 1969. The instrumentation
and avionics were brought up to today’s standards, and the cabin interior completely renewed” says Mr. Pallaske.