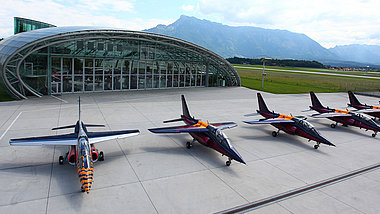 Four fully operative, demilitarized Fairchild Dornier Alpha Jets belong to the fleet of The Flying Bulls. Manufactured in collaboration by the companies Dassault, Breguet, and Dornier, the military version of this aircraft was deployed in a good dozen national defence forces (the air forces of Portugal, Egypt, Morocco, and five other African countries continue to use it actively).

Because of its perfect flight properties and its technical reliability, the Alpha Jet was and continues to be utilized as a high class training, instructional, attack, and aerobatic (Patrouille de France) aircraft.

After the German Luftwaffe had determined to retire its 175 Alpha Jets in the early nineties, they were preserved and warehoused at the Fuerstenfeldbruck Garrison.

At an auction of German federal property, the Flying Bulls acquired two of the jets, demilitarized them, and have been using them ever since for exhibition purposes as well as for replacement parts.

An opportunity arose in early 2001 to buy two additional jets, this time directly from the company Fairchild-Dornier. These aircrafts were also demilitarized. In contrast to the other two, however, they are flight ready. The Flying Bulls restored the jets, installed civilian avionics, and acquired a permit for civilian flight in Germany. This makes them worldwide the first planes of their kind that are demilitarized and licensed for civilian use.

On the 6th, resp. 14th, of March 2002, the two Alpha Jets completed their second virgin flight and were transferred from Fuerstenfeldbruck to the production airport of the Fairchild-Dornier company in Oberpfaffenhofen/Munich. Both jets were presented to the public on May 8, 2002, in the context of the International Aerospace Exhibition in Berlin.

Because of the technical reliability and the great success of the two Alpha Jets, the Flying Bulls decided in the summer of 2003 to purchase a third and fourth aircraft of this model, entirely demilitarized, of course. All four Alpha Jets have proved themselves technologically in their deployments and are also flown, in accordance to the Flying Bull vision, at numerous air shows– to the great delight of a large international audience.