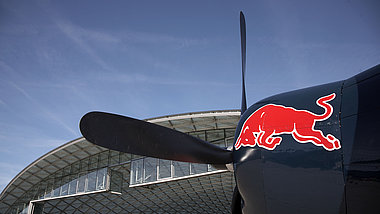 The passion for flying

“Who are the Flying Bulls?” you may wonder. They are a bunch of aviation enthusiasts with a great passion for rare historical aeroplanes and helicopters. And they are lots more besides. Not only do they watch over the most beautiful and exceptional fleet of planes in the world, they have played a significant role in the creation of Hangar‑7.

Their knowledge of plane maintenance and restoration is second to none. Witness this on the following pages, and take a look behind the scenes of the Flying Bulls at Hangar‑8. Climb with us into the plane and helicopter cockpits and join our mechanics and technicians who make sure the aircraft are in great shape every day.

The history of the Flying Bulls began in the 1980s. During this time, Sigi Angerer, a Tyrolean Airways pilot, flew modern jets, while his true love were historic planes. On his search for an affordable war bird, he found a North American T-28B and took it back to Innsbruck, Austria, for restoration. He soon added a Grumman G44 Widgeon and the legendary Chance Vought F4U-4 Corsair to his collection, when he met Red Bull founder Dietrich Mateschitz.

The Corsair brought Angerer and Dietrich Mateschitz together, and the latter saw an ideal corporate symbol for the “Red Bull gives you wings” advertising slogan in the extraordinary aircraft. And so the idea of the Flying Bulls was born. As the energy drink began to conquer the world, so did the fleet. With space running out at Innsbruck airport, a plan was hatched in the late 1990s to build a new hangar next to Salzburg airport.

It was also time to give the lose network of pilots and technicians a more permanent residence, and so “The Flying Bulls” company was created in 1999. Since then, the combination of technical excellence and stunning looks has made stars out of the Flying Bulls.