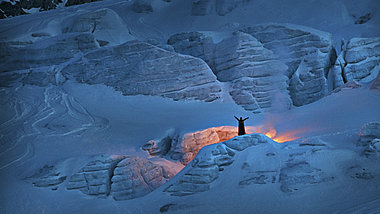 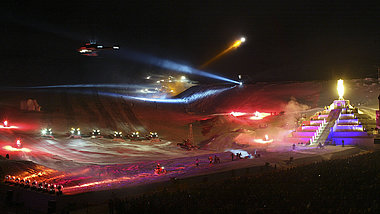 “Either one finds a way, or one makes one.” - this famous quote by the strategist Hannibal dates back 2,200 years. The exciting story about Carthage’s statesman is now set to be retold in a very unusual manner with snow groomers as elephants, skidoos, skiers, parachute jumpers, and paragliders as the troops of Carthage and the Flying Bulls as the gods and fighters at Troy’s gates.

The Hannibal glacier spectacle is the largest contemporary live performance in the world; it is staged on the Rettenbach glacier in Sölden (Tyrol) at 3,000 metres above sea level. The choreography involves more than 500 participants including dancers, base jumpers, parachute jumpers, paragliders, and skiers, as well as snow groomers, skidoos, and even avalanches. More than 8,000 spectators will be afforded the opportunity to witness the tale about the Carthaginian commander - a parable about the pursuit of power, intrigue, and world politics. The glacier spectacle is only performed once every two years.

The Flying Bulls also constitute part of the performance. The B-25 “Mitchell”, the T28 “Trojan”, and an Alpha Jet act as gods and fighters at Troy’s gates. This particular appearance presents very special challenges.

The environment is more than unusual. The glacier is located at about 3,000 metres above sea level; it is surrounded by high mountain peaks and steep slopes. Let’s not forget the difficulty of flying on sight in the dark. But that’s just the tip of the iceberg. In order to achieve the best performance possible, all 500 participants need to follow directions with split-second precision. This, of course, also applies to the Flying Bulls. As our pilots love a challenge, they are perfectly prepared for the spectacle.

Naturally, they can count on assistance from the ground. A performance coordinator is in charge of preparation and passes on information and instructions. While the aircrafts circle in an area close by, it is imperative that the pilots pay close attention to the instructions transmitted by radio. “2 minutes to site” is one of the commands for the pilots. A precise routing chart defines how many minutes and seconds it takes - for instance - an Alpha Jet to reach the performance location and also which route the aircraft is required to take. This means that the pilot in question needs to leave the holding pattern at exactly the right time in order to make its appearance in the live performance with utmost precision.

As you can see, the steeled nerves of our Flying Bulls are tested once again during this performance. It is vital to follow the instructions of the coordinator, find the right route through the mountain peaks, and appear in the performance on the exact second. Thus, nothing stands in the way of the spectacular appearance of gods and fighters.

More information can be found here.